Anantha Krishnan studied Documentary filmmaking program from University of film and theatre arts, Hungary and Luca school of Arts, Belgium. Krishnan works as a cinematographer and occasional documentary filmmaker in India and Belgium.

a magician, by contrast, might claim the ability to manipulate that reality in order to create a different manifestation. Can he change his real situation? Panic is a loud thump that howls our worst fears. The magician Roland Kaszanyi is a protagonist of our age where depression and anxiety invade our inner senses. He lives in Budapest, he slowly launching himself as an upcoming illusionist while wrestling with his inner-self. The film possesses the essential cinematic feeling to communicate the uncertainty of the protagonist.‘ Where is my red tie ‘ is a sensorial conversation with our senses and offers deeper pathological encounter towards the consciousness of an illusionist. This is experimental -Transcending narrative transmits the idea of the inner crisis of a mind hunter who is looking at his failure can occur in the future. 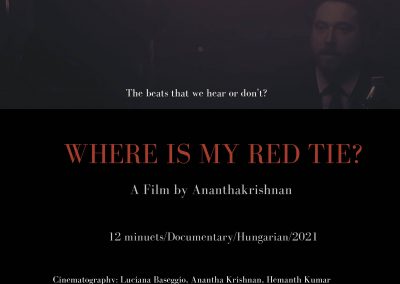